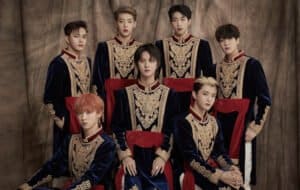 The kings are back! KINGDOM just made their new comeback with the new MV “Black Crown” and talks with BreakTudo about their career.

Amazing. Creative. Charismatic. Kings. That’s all we can say about this legendary comeback! Check it bellow.

The group has an interesting concept. They aim to represent different kings and their respective governments. For this reason, their songs and MVs mix medieval references and they also can mix perfectly with the rhythms of K-Pop. KINGDOM has launched its latest project and it is possible to notice the support of fans around the world on social media.

BreakTudo had the opportunity to ask them some question and you can read it bellow:

EN: Hello, KINGDOM! First of all, it is an honor to talk to you all. BreakTudo and I really respect you and your projects. Thank you for having us and congratulations!

EN: Let’s start talking about the group today, I mean, what’s the biggest difference that you guys noticed since the beginning of the group, until now?

EN: If you needed to define Kingdom in three words, what would it be?

KINGDOM: To be loved and cherished by many people, including our dear Kingmakers.

EN: What was the best moment you had while recording your 3rd mini-álbum? Did something funny happen or something that you guys will never forget?

KINGDOM: Filming the music video was such a memory. We especially enjoyed the scene where the ‘good’ KINGDOM and ‘evil’ KINGDOM confront each other. It was funny to act it out! Please check out that scene in the music video.

EN: In your opinion, what’s the biggest difference from History of Kingdom: Part I to History Of Kingdom : Part Ⅲ.?

KINGDOM: The third album includes a track composed and written by our members. In the first album, some members only took part in writing lyrics, but in this third album, they took full credit for composing and writing a track. We feel proud of it. In terms of KINGDOM’s fictional universe, the growth of the kings stands out. The third king took the crown already.

EN: Could you talk a little bit about the kingverse (universe of the kingdom)? Could you describe the personality of each “character”?

KINGDOM: In KINGDOM’s universe, there are seven kingdoms ruled by seven kings. In season 1, where we currently are, the seven kings who were lost and wandering manage to find their true selves and mature. When the seven kings all ascend the throne, the story will get even grander and epic! Stay tuned. The personality of each king is hinted at in the music videos. Arthur is mentally hurt but has a strong spirit. Chiwoo is young and immature, yet keeps maturing. Ivan, the protagonist of this album, is a two-faced character- he has a warm heart but also coldness.

EN: There is a question that fans are very curious about and coming up with a lot of theories. In the history of KINGDOM, is there any villain among kings?

KINGDOM: There is no villain among us! All of us are kings reigning their kingdoms, helping each other. However, we still are at season 1 and got a long way to go. So who knows, there might be a plot twist…!

EN: If the member can choose just one song of the group, including your 3rd mini-álbum ‘History Of Kingdom:PartⅢ. Ivan’, which song would it be and why?

Dann: ‘Make Us’, the first track that I and Mujin composed and wrote! It is a song that expresses our honest emotions. We will continue to deliver our stories to you through our music, so please stay tuned!

Arthur: I really like the song called ‘Magical’. Among our nice b-side tracks, ‘Magical’ is the best song to hear when we are going through a hard time. It gives me confidence. The lyrics say “Wake up and hit the fire”, which felt like a message for me. The chorus has addictive melodies which are easy to sing along, thus is enjoyable for all listeners.

Mujin: I would pick ‘Night Air’. It is the first song of which I took part in production, and I personally favor the atmosphere of the track.

Louis: I like all the tracks, but will pick ‘ON AIR’ from this third mini album. It is comfortable to listen, and we have pleasant memories of recording it.

Ivan: I like ‘Black Crown’ the most, since it is the title track of the album of which I am the main character. Preparing for this track made me confident and happy.

Jahan: I would pick ‘Fallen Star’, a b-side track of our third album. It has my type of mood, I love it.

Chiwoo: I favor ‘ON AIR’ the most. I think it is a great song to hear while driving. I recommend it to you!

EN: In your opinion, which color represents the fandom and why?

KINGDOM: To be honest, we never thought of a color to represent our fandom. It is because our dear Kingmakers keep going through changes, into new colors, as we go through changes for each album! A representative color does not really matter, we think. Since we are always connected with you, right?

EN: You guys just debuted and already have so many fans from different places, including Brazil. I think you guys know you have a lot of fans here in Brazil, right? They are always promoting and streaming your songs here. How do you feel about it?

KINGDOM: We are so delighted and grateful for the love sent by Brazilian fans. We do dream of performing live in Brazil someday- not streaming nor promotions, pure live performance in front of Brazilian fans.

Be ready to listen to the album with more awesome songs besides the MV. If you are looking for concept, talent, incredible voices, listen to the group’s new project

That was our interview with the group. A big thank you to Taeon Yoo (APAC Division, REELS Corporation and Graff Records) for helping to connect South American fans with the group. We hope we can have KINGDOM doing shows here and meeting fans as soon as possible.

You can follow the k-pop group on social media: